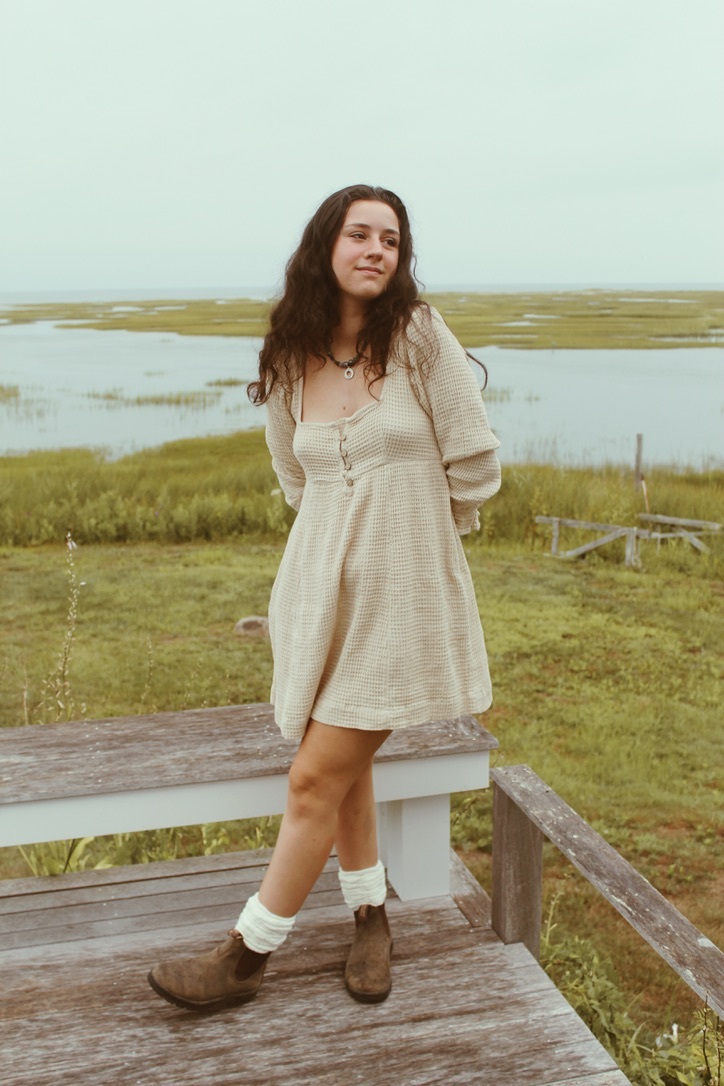 From disco balls to shark teeth to magic mushrooms, a student-run online jewelry store featuring fun and eclectic designs has captured the attention of the Emerson community and beyond. The store has grown through creative promotional strategies and collaborations with the music industry.

Junior Creative Enterprise student Livy Burdo developed a love for crafts and nature as a child. In November 2021, she found a way to combine these passions via a online jewelry store selling beaded necklaces and earrings with a unique name.

Although Burdo has always been involved in the arts and created different accessories and crafts, the pandemic gave her more time to cultivate this hobby. Soon, Burdo’s affinity for bead jewelry making outgrew its place as a midlife craft and morphed into a small business.

“I was creating so many necklaces so quickly and I really wanted to be able to share them with my friends and sell them for fun,” Burdo said in an interview with the Beacon.

To broaden the field of potential customers, Burdo decided to open an Etsy store. Since then, his business has grown from a few occasional sales to relatives to around 20 sales a month.

“I thought [Etsy] would be the easiest way for me to sell the products while also marketing to people who might not be in my general social circle,” Burdo said. “Give the products to international people and people who live all over the United States”

Burdo differentiates her shop from other Etsy jewelry businesses with her natural aesthetic, which combines her coastal upbringing in Fairfield, Connecticut and Yarmouth Port, Massachusetts, and her connection to nature.

“I grew up near water, so I love water and mountains,” she said. “It’s not super bohemian, but I feel like my jewelry is really beachy and earthy, which definitely stands out.”

Burdo currently manufactures dangling earrings and pearl necklaces, which allows her to focus and explore both accessories in depth in various innovative ways and sets her apart from other boutiques.

“I also feel like the most important thing is that the aesthetic of the store is really cohesive and stands out from the rest,” she said.

An expressive aspect of the Burdo brand is the unique name of its products. While most Etsy stores focus on descriptive names to attract consumers, Burdo’s focus on creativity indicates his aspirations outside of Etsy, such as selling on his own website, which sets his products apart from others.

Her favorite product to create is the shark’s tooth necklace – aptly named “Bite-Size Necklace” – which is inspired by growing up near many large white sightings, and currently sells for $27 on her Etsy store.

Her shop also features products named “Disco Diva”, “The Night We Met” and “Written in the Stars”, demonstrating her dedication to music and adding character.

Burdo, who is majoring in environmental studies, stressed the importance of sustainable production by supporting other small businesses.

“I try to make sure I’m aware of where I’m buying my jewelry,” she said. “There’s a little business near me that I love where they sell a lot of pearls, and all the jewelry they sell there is so beautiful, so I frequent it a lot.”

Burdo transferred to Emerson in the spring of her sophomore year and majored in BCE with a focus on the music industry, but her jewelry business became an outlet to explore different aspects of the entrepreneurial field.

“Once I started playing more with my business and talking to my teacher, and different friends were really encouraging about it, I [became] more open to using BCE as a way to explore so many different creative realms,” Burdo said.

Among Burdo’s many interests is a love of music, which prompted his collaboration on a recent jewelry collection with friend and musician Hana Eid.

“[Eid] was ready to release a new single, and she reached out to me about the idea,” Burdo said. “She basically helped design each piece and bring it to market. It was so much fun.”

Eid’s music sits at the intersection of soft indie folk and electric guitar-based indie rock. Before his recent single, “Sunroof”, Eid worked with Burdo to create a collection of lyrically inspired jewelry.

“Almost every piece is directly named after a lyric,” Eid explained. “The [car earrings] are named “midnight cruise” which is one of the lines of “Sunroof”. Moon phase bracelet, [titled] ‘in phases’ is a track that I really like, and I think it’s really symbolic of how the song talks about the phases of a relationship.

Eid said she loved choosing the colors she envisioned for the song and turning the energy of the music into something tangible. She takes pride in the creative expression of not only the lyricism, but also what each song means to her and how the jewelry collection encapsulates those meanings.

“I’ve always been passionate about music as an art form and finding how it connects to other art forms,” ​​Eid said.

Eid and Burdo collaborated virtually on designs and colors, sharing a love of earth tones. They communicated through Google docs and swapped Pinterest boards to achieve their ideal designs.

“I really want people to feel connected to me on a personal, down-to-earth level,” Eid said.

Burdo hopes to continue collaborations with artists and move from an online-only platform to in-person sales.

“Next summer I’m going to talk to local businesses about selling in their stores,” she said. “I would also like to be able to attend different arts and crafts fairs, as well as being able to work with micro-influencers who live in different parts of the world so that I can reach a wider audience.”