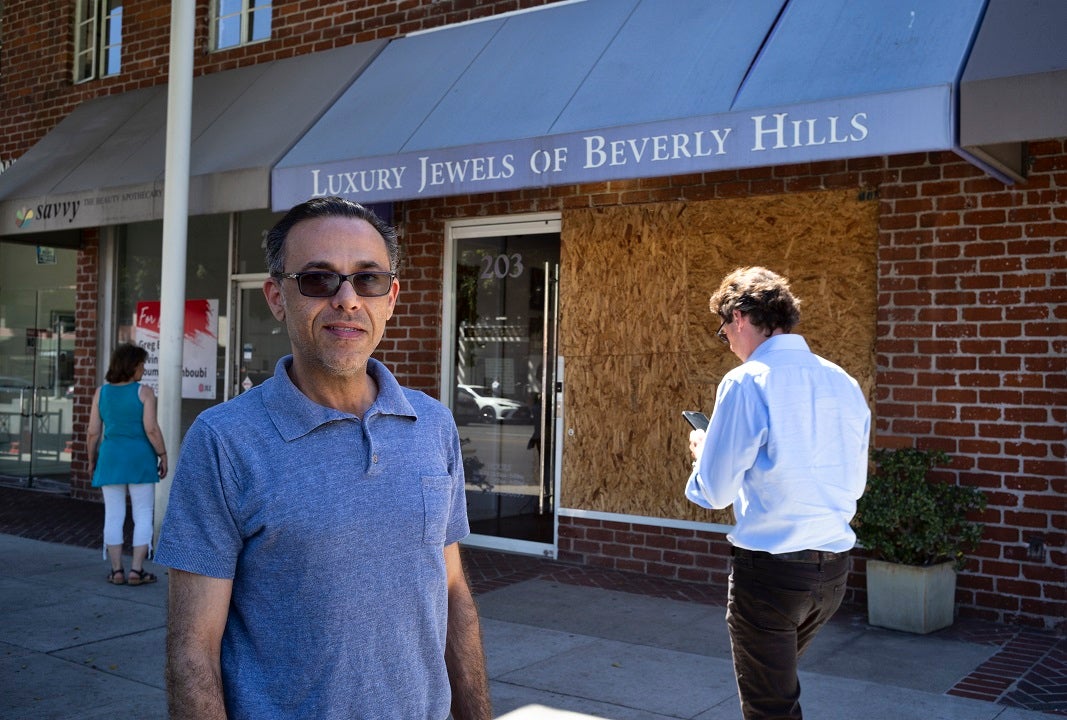 At least five suspects targeted Luxury Jewels in Beverly Hills around 1:45 p.m. Tuesday when they appeared smash the store window and seize items on view, according to images taken by passers-by on busy Beverly Drive.

Store owner Peter Sedghi said he was in his office when he and his staff heard what sounded like gunshots.

“I yelled at my employees to get everyone to the floor. I pressed the panic button and went under my table,” he told Fox News. “I waited for the gunfire to stop. I grabbed my gun and ran.”

“They look like young children,” he added of the suspects. “Everyone is really shaken up.”

As he walked out, Sedghi said he saw the group fleeing the scene. They must have hit the tempered glass window about 14 or 15 times with sledgehammers to break it, he said. They walked away with between $3 and $5 million worth of merchandise.

The Beverly Hills Police Department told Fox News the suspects were wearing black clothing with face masks. They arrived at the scene in an SUV reported stolen in Long Beach and fled on foot, abandoning the vehicle.

Investigators made no arrests and were unsure of the age range or gender of the suspects, police Lt. Giovanni Trejo told Fox News.

“It is very concerning…despite all the efforts we have made to combat and prevent this, we continue to have these crimes, especially during the day,” he said.

Sedghi said the thieves took items near the store window because they would otherwise have had to be warned to enter the store. Amid the COVID-19 pandemic, it stopped using armed security guards, he said.

Pedestrians walk past a barricaded Luxury Jewels of Beverly Hills. Los Angeles police are warning people that wearing expensive jewelry in public could make them a target for thieves – a note of caution as thefts are on the rise across the city.
(AP Photo/Richard Vogel)

“Now we’re going to have an armed guard again,” he said. “

Before reopening, the store’s inventory needs to be counted and a new window display will need to be installed, he said.

While the brazen thefts are concerning, Trejo noted that investigators were able to solve the crimes in a timely manner. He cited the arrest of Ariel Maynor, who pleaded guilty to killing Jacqueline Avantwife of legendary music manager Clarence Avant, during a home invasion in December.

More recently, Beverly Hills detectives arrested several suspects and were looking for others on the run in a series of robberies. In February, two gang members were each sentenced to a dozen years in prison for an armed robbery at a Beverly Hills restaurant where a customer was shot in the leg and a $500,000 watch was stolen. taken from another customer.

Tuesday’s incident comes as Los Angeles County continues to see an increase in thefts, whether smash-and-grabs or the kind where thieves follow their victims home or to isolated areas.

On Tuesday, the LAPD’s top cop said robberies are up 18% from a year ago and the city is seeing a 44% increase in robberies with a firearm from 2021.

“Most concerning is that there has been an increase in the levels of violence used during these robberies and the frequency with which a firearm has been used,” Chief Michel Moore said in an LAPD alert.

He also warned there was a “marked increase” in armed robberies where many victims wore expensive jewelery in public.