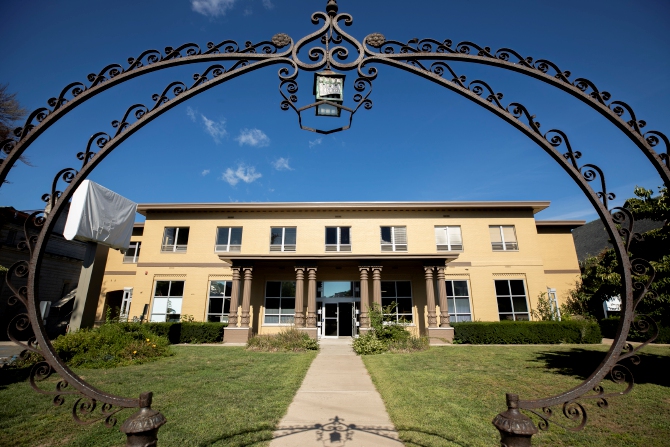 WALLINGFORD – The iconic former Wells Fargo Bank building on North Main Street will soon house a jewelry store and cafe on the first floor as well as four apartments above.

“I tried to control the parking space and the building became available so I bought it,” Gouveia said.

Gouveia decided to rent the first floor of the building to a jewelry store, ACHIQ Designs, and to the café, Le Jardin Café, which are both owned by Fabiola Giguere. ACHIQ Designs has a location in Cheshire at 1081 South Main St.

Fabiola Giguere’s husband, Brad Giguere, is a chef and will be the one preparing the food for Le Jardin Café, which she hopes will include salads, paninis and other healthy options.

“We are going to have a variety of teas and of course coffee, regular coffee, cappuccino, a place to sit down, read a book,” Fabiola Giguere said.

The businesses will be side by side, with the space equaling 4,000 square feet.

“Knowing the family, I think they will contribute a lot,” Gouveia said. “They are a super hardworking family. They are very local and we felt really comfortable renting it from them. I think they are going to do a lot and I think Wallingford could use a few more gift shops so I think it was a perfect fit.

Liz Davis, executive director of Wallingford Center Inc., said the businesses will be a nice addition to downtown.

“She’s more of a boutique, which is really different from just jewelry,” Davis said. “So we really need that downtown because Dressing Room is moving, so having that retail space is really, really beneficial to us.”

Five months ago, Gouveia said they were trying to put a sprinkler system in place, but they are still waiting for parts for the fire hydrant, which would complete that stage of construction. This delayed the opening date of the shops on the first floor and the establishment of the four apartments.

He said Fabiola Giguere hoped the businesses would be up and running by Celebrate Wallingford, October 1-2, but with problems getting some parts for the fire hydrant, Gouveia is unsure when the building will be ready .

“The fire hydrant was a problem,” Gouveia said. “Until this is done, nothing can be done.

Fabiola Giguere now hopes her businesses in Wallingford will be open by the festive period.

Gouveia sold The Library Bar and Bistro in May to John Massella, who has been in the food industry for about eight years. However, Gouveia still owns the building at 60 North Main St.

“The people who bought the library are really down-to-earth people,” Gouveia said.

No longer owning the library, Gouveia wants to spend more time focusing on the Gouveia vineyards and completing construction of the building at 86 North Main St.

The building also has a basement and Gouveia is considering renting it out, but if not, he said his family might consider doing something with the space themselves.

When it comes to finding people to hire, Gouveia looks for people he thinks will fit in well in Wallingford. It is therefore fortunate that Fabiola Giguere rents the first floor and that Massella has taken over the library.

“I think these two people are going to be really great for the city,” Gouveia said.