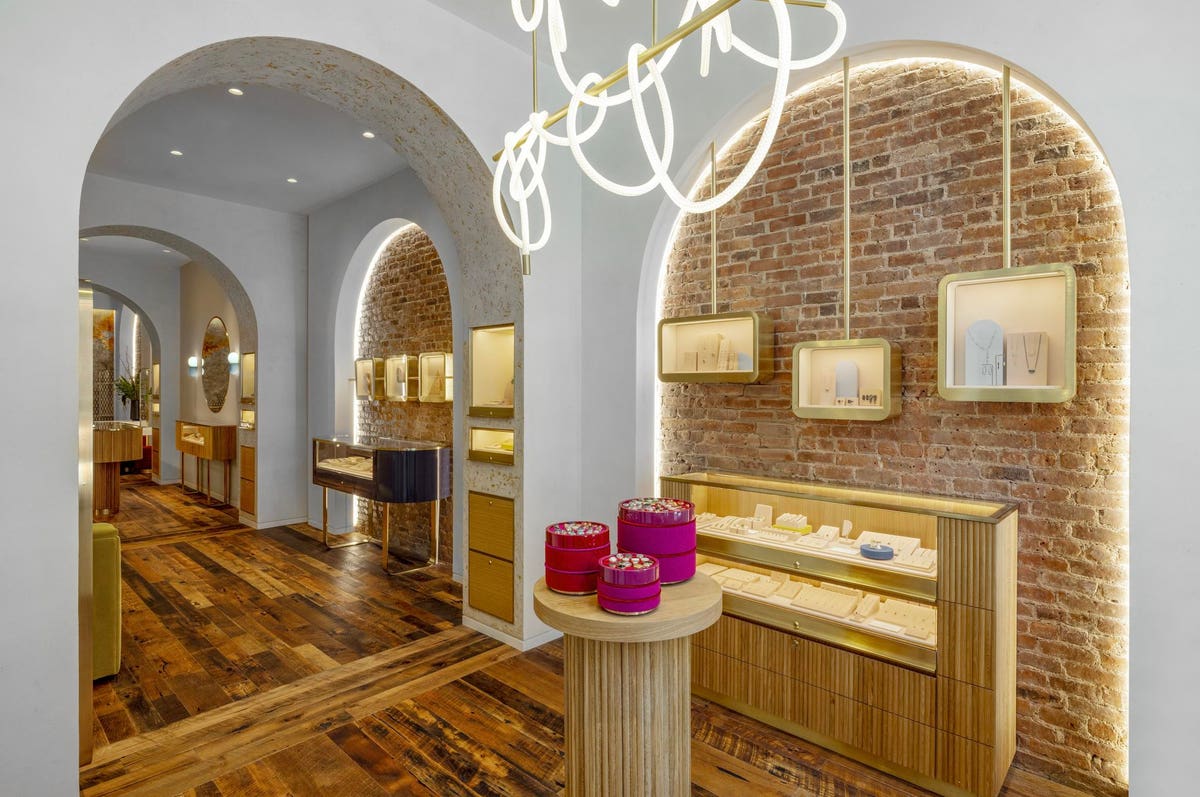 Sometimes home is where the jewelry is. Sisters Jennifer Gandia and Christina Gandia Gambale have found another downtown location for their family’s jewelry store, Greenwich St. Jewelers, to call home. The business, founded by their parents Carl and Milly in 1976 on the street of the same name, moved to a 1,550 square foot location on Reade Street after spending the last twenty years on Trinity Place.

Located in the second cast-iron building constructed in New York City known as Obsidian House and dating from 1857, the airy space draws inspiration from original details to create a fresh, modern environment. In collaboration with Maori Hughes of MAOarch, original exposed brick walls and an archway are fused with contemporary walls and lighting, resulting in a backlit architectural detail lining the space. The arched design also creates three distinct sections of the store. Behind a newly constructed archway is a dressing table and a doorway leading to a private bridal salon rendezvous room. According to Gandia, despite a healthy digital presence, most engagement rings are sold in person.

“We wanted to mix old and new to feel like walking into an apartment,” said Gandia’s eldest Jennifer, noting the reclaimed wood floors and a light sculpture of modern art from a local artist. The walls also feature local artistic talents Rosalie Knox and Mason Nye discovered in the area, which now has many gallery spaces.

The decision to move from Trinity Place was spurred by a lease renewal and fluctuations in the area since 9/11. “My parents, who witnessed the attacks that day, had to move because the building was damaged. Trinity Place was a good opportunity because it was three times bigger,” recalls Gandia.

At that time, Jennifer had taken a sabbatical from her press position for NARSS cosmetics to help her parents restart (the business was closed for ten months after 9/11). “It was back when independent jewelers were coming on the scene, and jewelry was becoming cool and a fashion statement,” she recalls, adding how receptive her parents were to the new ideas she brought to their business. “They were open to taking on new brands when people were just looking to survive,” she said.

Once the 9/11-induced downtown ghost town came to an end nearly five years later, things bounced back to Hurricane Sandy and Covid. “The pandemic has eroded the momentum of the area, which has struggled with foot traffic due to the lack of nearby retail businesses besides the Oculus. Things are shutting down there too,” he said. she noted.

The company has a strong downtown DNA that the offspring wanted to preserve, so Tribeit was a natural choice. “We have a service business, and it was a community where we could offer that service. We have two master jewelers on staff, and we do custom work, antique restoration, restyling and repair. That was the start of my parents’ business,” says Gandie. By coincidence during their research, they discovered that the area between Reade and Chambers once housed a small silversmith and blacksmith district in the late 19e century and early 20e century.

Upon entering, customers find a careful selection of pieces from brands such as Melissa Joy Manning, Eva Fehren, Alice Ciccolini, Marla Aaron, Single Stone, Sylva & Cie, Tenthousandthings, Lorraine Wesr and Wwake. A display of bold and colorful stone rings by Jamie Joseph sits at the entrance to the store, tempting try-ons like a candy bowl of jewelry.

Bridal was and continues to be big business for the store, with approximately 70% of bridal styles coming from house brand. For high fashion jewelry, 25% is house brand and the remaining 75% are independent brands typically owned by women or BIPOCs.

Most Greenwich St. Jewelers pieces are made from recycled gold, whether by design or circumstance, essentially becoming the industry standard in the wake of sustainability concerns. “Most of the big casting houses use it now; it’s like the decision was made for you because they use it,” she said.